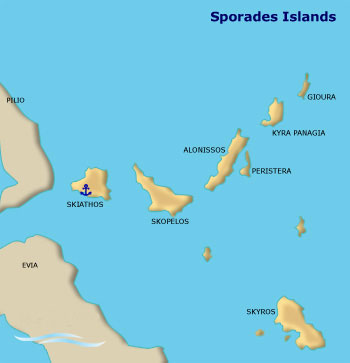 The Sporades or also called Northern Sporades or Thessalian Sporades to distinguish them from other Sporades, are an archipelago of Greece, north of the Aegean Sea.

They take their name from the adjective sporas which means in ancient Greek “scattered”, “disseminated”, as are the islands that constitute this set, as opposed to the group of Cyclades ordered around Delos.

The archipelago comprises eleven islands of which only four are inhabited.

Beautiful white sand beaches, ancient ruins and abundant marine life will give you a feeling of exploration and independence.

The prevailing wind in summer is the “Meltemi”, blowing from the northeast (force 3-4), although occasionally, in July and August, the wind blows stronger from a north-westerly direction with a force 4-6.

Let the beauty of the islands, forests, beaches, villages, churches and castles take you on a journey through time.