The Sporades or also called Northern Sporades or Thessalian Sporades to distinguish them from the other Sporades, are an archipelago of Greece, north of the Aegean Sea.

They derive their name from the adjective sporas which means ‘scattered’, ‘disseminated’ in ancient Greek, as are the islands that make up this set, as opposed to the group of Cyclades ordered around Delos.

The archipelago comprises eleven islands, of which only four are inhabited. 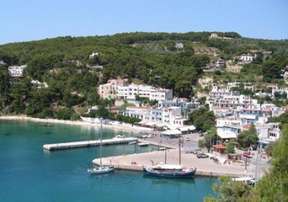 Patiri is the capital and the main port. It is in this cove that life is most active: restaurants, automatic ticketing, bars, souvenirs, post, various rentals, disco, shops … The majority of the population is concentrated in this city. Patitiri was built after the destruction of the ancient capital of the island, Chorio (or Alonissos), destroyed by an earthquake. The houses are built in amphitheater while respecting the natural beauty of the region.

The Alonissos Marine Park in Northern Sporades is the first national marine park in Greece and was established in 1992. It is located in the east of the country, encompasses the Sporades Islands and comprises seven uninhabited islands. It occupies an area of 251,440 hectares. The need to protect the seal of the Mediterranean was the reason for creating the marine park.

Do not miss:
The capital Patitiri (shops and taverns and Folk museum), the national marine park. 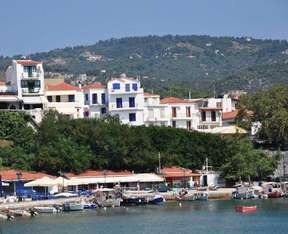 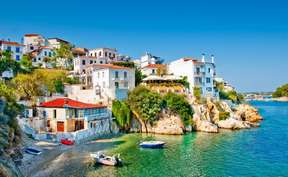 Skiathos is a verdant island in the Aegean Sea. It has an area of 48 km and a coastline of 44 km. It has 70 beaches or coves bordered by a sea almost in the colors of the Caribbean and wooded hills. Some consider it has the most beautiful beach in Greece, Koukounaries.

Cosmopolitan, ideal for lovers of sailing but also for luxury lovers.

The oldest and most mountainous districts above the old port, around the churches of Tris Ierarhes and Agia Triada, preserve their charm with their small squares and garden houses, although the north has been affected by tourist development. Arriving in the port of Skiathos, you will be welcomed by Bourtzi, a peninsula located between the new port and the old one, covered with pines where are the ruins of a Venetian citadel built in the thirteenth century. Directly opposite, you can see the amphitheatrically layout of Chora with its houses with red roofs.

Two and a half kilometers from the town, to the north-east of the Skiathos mountain range, the 13th-century Evanglistria monastery (opened daily from 10:30 to 14:30 and 17:00 to 20:00) is the first monastery in Skiathos. An eclectic museum (3 km) contains many documents and photographs of the wars, as well as a folklore wing centered on an old bread oven.

At the northern end of Skiáthos, Kastro is a fortress that once protected the inhabitants of pirates since the 16th century. After 1830, when the Greek state cleared the seas of the marauders, the place was abandoned in favor of the current city. There are 22 ancient churches that have survived the centuries-old or murals of the birth of Jesus Christ, but also the embedded ceramics of Agios Nikolaos.

The beaches:
The beaches of Lalaria and Koukounaries are among the most beautiful in Greece.
– Lalaria: Beach that has made Skiathos famous in the four corners of the Earth. Turquoise waters, white pebbles, steep rocks. Very busy.
– Koukounaries and Strofilia Lake: As famous as Lalaria, it is considered the most authentic of the Mediterranean. Golden sand and beach surrounded by pine trees. A little further on, Strofilia Lake is a biotope that catches rare species of birds.
– Banana: Small nudist beach of the island. Fine sand and crystal clear waters.
– Mantraki: Wild beach and quieter, crystal clear waters.

Do not miss:
The Kastro, the monastery of Evangelistria, the beaches of Koukounaries and Lalaria. 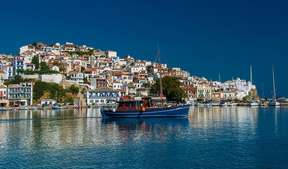 Skopelos is a Greek island of the Aegean. It is the largest of the sporadic islands with an area of 95 km.

Skopelos is a mountainous island (climax: Mount Delphi, 681 meters), whose climate is characterized by mild and rainy winters (snow is rather rare and does not fall every year) and hot, sunny summers. The population triples in summer. Skopelos or Chora is also the name of the capital of the island, and its main port. It is large but very quiet. The city alone has more than 3,000 inhabitants out of the 5,000 that comprise the entire island.

According to some visitors, Skopelos would be the most beautiful island of the Sporades. The canvas of Skopelos is composed of landscapes embellished by pines and a turquoise blue sea. A city that is distinguished by its architectural character with its narrow alleys and neoclassical white houses decorated with flowers. Some scenes from the movie ‘Mamma Mia’ were shot on the island.

Loutraki is one of the two ports of the island built on the ruins of the ancient town of Selinous. Its Glossa village is built amphitheatrically on the side of the hill. The church of Panagia Eleftherotria and the pottery workshop of the village can be visited.

Agios Ioannis is to be visited for its pretty chapel perched above the sea that one finds on the postcards. The monasteries to the east of Chora also offer beautiful panoramas.

Do not miss:
Chora, Glossa, Agios Ioannis, the monasteries east of Chora. 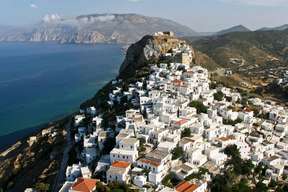 Skyros or Skiros is a Greek island of the Aegean Sea and the Sporades. It is attached to the nome of Evia and has 2,711 inhabitants for 209 km2. Skyros is an island at the same time wild and alive while being away from mass tourism. The capital of the island is the city of Skyros (or Chora), located above the east coast. It is connected to Linaria by a road of 11 km.

Linaria is the port of the island. On arrival you will see many fishing boats, sailboats and tourist boats and you will find many taverns and restaurants. There are also many souvenir shops, newspaper shops and mini markets.

The great beaches of Magazia and Molos, located nearby, concentrate a good part of the activity of the island. The Magazia sandy beach is a 10-minute walk from the town of Skyros, Chora. As it is the main beach of the city, it is crowded in high season.

The long beach extends 800 meters, reaching the neighboring village of Molos. Molos is the most organized beach on the island. The sand is fine and the water is clean. The atmosphere is relaxing, especially at sunset.

Near Molos beach, outside of Linaria you will find the beautiful chapel of Agios Nikolaos, built on a huge rock by the sea. It is the largest of the island. There are also many other small chapels scattered around the area.

A few hundred meters from Linaria is the beautiful beach of Acherounes.

Acherounes is a beach sheltered from the strong winds. This beach is ideal for families with small children as the water is very shallow and warm.

Linaria and Acherounes are about eight kilometers from Chora and are accessible several times a day by bus.

The majority of the population is located in the northern part of Skyros. The South is almost deserted and wild. Skyros is famous for its ponies and marbles. The best known craft of the island is embroidery, used for the ornamentation of linens and traditional costumes. The island is also renowned for its craftsmanship. The typical Skyros furniture is found in many houses in Athens and other cities. It also offers an interesting production of ceramics. Popular craft workshops in the capital city and Yalo produce wooden, ceramic, woven baskets and weavings.

There are several archaeological sites: Kastro, the ancient acropolis above Chora, where the view is magnificent, and Palamari in the north of the island.

There are also several churches representative of Byzantine art, such as Saint George of Skyros, built on a rock overlooking the sea by Nicephore Phocas, the 10th century basileus, and the Panagia (Notre Dame) by Kitso.
Skyros has beautiful landscapes like Gialo, Achilli or Vrachia, and beautiful beaches: Nyfi, Tris Voukes, Phanari, Diapori.

Do not miss:
Chora, the view from the Kastro, and the beaches of the North.